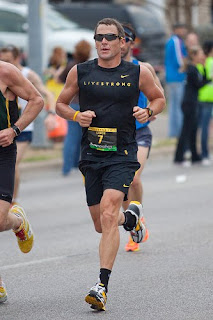 Found myself in Austin Texas on February 20th ready to run a half marathon. Hadn't planned this out too far in advance, I think I maybe had committed to running it two months out. Training had been going well and I felt I was in good shape. In fact, based on some of my workouts I was guessing I might even have a chance of reaching my bucket list goal of a sub 1:20:00 half marathon. That was before I drove the course...

Driving the course the night before it didn't take long to realize this wasn't going to be the fast course I thought it was! Turns out there are two big half marathons in , 3M is the fast one, this one isn't. So when the gun went off on the 20th, I had readjusted my expectations and was now looking to just beat my previous half marathon PR of 1:24:45, or 6:28 pace per mile.

Prior to the start, they announced that Lance Armstrong and Joan Benoit Samuelson were running the 1/2 together. I thought that would be pretty cool to actually run with them, but didn’t have much more than a fleeting thought about it.

The first two miles or so were mostly flat or downhill with the exception of one short steep hill. I settled into a comfortable pace and was at about a 6:20 average when we began a long three mile section of gradual hills. To make matters worse, we were also running into a headwind! When we finally reached the end of this long gradual climb, my average pace per mile had dropped to my previous PR pace of 6:28. At this point I grew quite discouraged. I had driven 14 hours thinking about a goal of breaking 1:20:00 and now I’m not even running faster than my previous PR pace. I seriously considered easing up and turning the race into a training run. I had some serious self doubts about my ability to race anymore. Only several months earlier I had driven to to run a fast marathon and had instead DNF'd turning it into a long training run. Had I lost my mental toughness? Was I washed out as a runner? 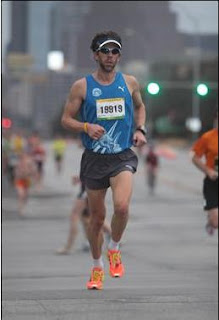 About this time we began a stretch of several miles of gradual downhill. Another runner caught up to me and said a few things in encouragement. So I picked up my pace slightly and began to run with him. It wasn't too much longer when another group of runners caught up to us, and this group just happened to contain Lance and Joan! Within a few short minutes I had gone from being mentally defeated to instead leading a 7 time TDF winner and an Olympic Marathon Gold medal winner in a half marathon. For the next several miles, 6:15 pace seemed quite easy! Notice the video camera and no bib on the guy behind Lance!

Around 8.5 miles in Lance pulled away from me and the small group I had been running with fell apart. My average was now down around 6:24. I knew the course was mostly flat until the last 5k, so I was now pretty hopeful that I might beat my old PR! It definitely wasn't easy, but I ended up finishing in 1:24:35, ten seconds under my PR. Definitely wasn't as fast as I had thought I might run, but after the mental struggle I had midway through, it was definitely a rewarding result. Lance did beat me in the end, but I led him through more than half the race! The person who finished immediately after me, Joan Benoit Samuelson. 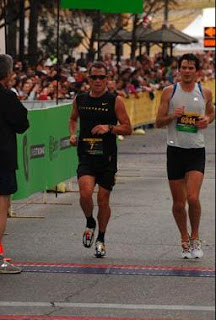 That's a marathon runner next to Lance, switched to the half to run with Lance?
Posted by Tony Rigdon at 8:12 PM