Did Race Cheat Michael Rossi Attempt to Steal $10,000 by Cheating in a Turkey Trot?

After it was shown beyond a doubt that Michael Rossi cheated to get to the Boston Marathon, Letsrun.com issued a challenge that included this: "we’ll also give him $10,000 if by the end of 2015 he breaks 70:00 in a standard 10-mile course or 20:00 for 5k. 70:00 for 10 miles is equivalent to 3:16:30 for the marathon according to McMillan and 20:00 for 5k is equivalent to 3:14:53 in marathon according to McMillan." To anyone who is a runner and knows anything about racing, they know that a sub 20 5k would be incredibly easy for someone that can run a 3:11 marathon. The point of this challenge was to hammer home the point that Michael Rossi was never in 3:11 shape because if he was, the $10,000 would have been easy money. 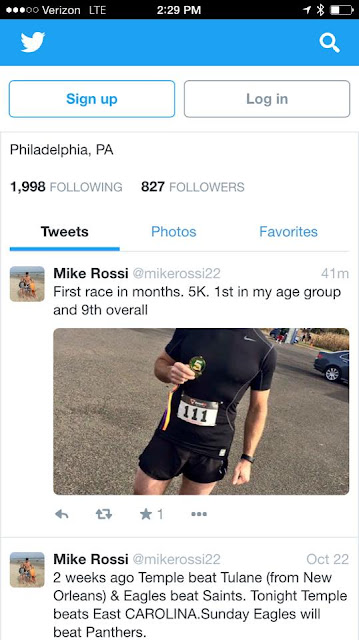 Here he is starting at the front and looking like it is a 100 meter sprint, did he perhaps break 20 at this 5k? 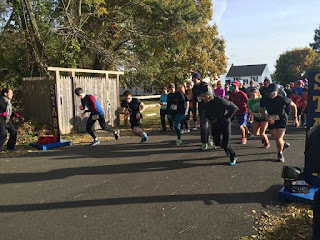 Michael Rossi lined up at the front of a 5k, started like a sprinter, and finished in a pedestrian 23:51!﻿

On November 20th, Rossi tweeted "it's coming... and right soon." a very vague reference, likely taken from Shawshank Redemption, and possibly referring to going sub 20 for a 5k to claim the 10k: 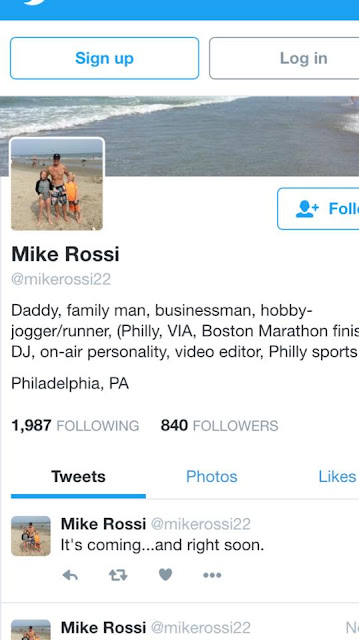 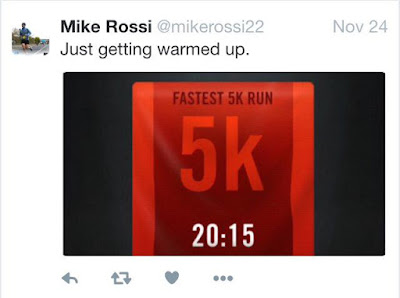 Michael Rossi has made many claims. He claims he was exonerated of cheating and that he has additional pictures of himself on the Lehigh Valley Via Marathon course. But Rossi never backs up these claims with any proof. Ask yourself this - "If you were able to run a 3:11 marathon and had the fitness to run a 5k in under 20 minutes, but you were now believed globally throughout the running community to be a cheater, would you not accept the challenge and meet it in a publicized manner with proof? Such as at a track with video and witnesses? Or, would you post supposed 20:15 5k training run badges to your twitter feed and infer that something big is going to happen?" Likely, the 20:15 was tweeted to give credence to a sub 20 that Rossi was soon going to cheat to achieve!

Saturday 28th, Rossi tweets the following picture, obviously the start of a 5k, turns out it was the Haddon Township Turkey Trot 5k. 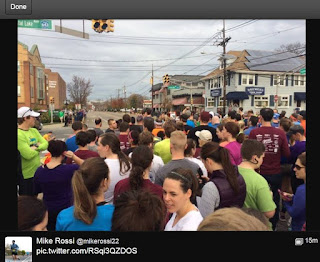 The next tweet was this photo with the text "results soon": 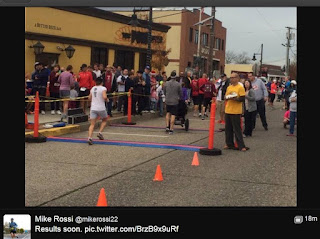 Many of us who have been following the "Rossi saga" suspected he might have cheated his way to a sub 20 time and were waiting for the results to get posted.

Finally, results were up:

I have sorted the results based on the chip/gun time differential to show how out of place Rossi is in the results! We have a 6:49 mile pace "runner" surrounded by people who walked the course.Very suspicious for someone going for $10,000 to not have crossed the starting line within seconds of the gun start!  As "Fat Hurts" over on the Letsrun.com message board stated:

"I sorted the data from the race. 743 runners finished. Rossi started way in the back. Only 29 runners started behind him. This means that to run a legit 20:25 and finish 48th, he would have to pass 667 of the runners in front of him. Nobody weaves past 667 runners to set a big PR in a 5K. He cheated again."

Was he hiding at the back and planning on slipping off the course only to rejoin in time for a sub 20 minute 5k? Did he mistime things and end up at 25 seconds over?

Finally, after results were posted online and the large gap between the chip and gun time was brought up on the Letsrun.com message boards, the following is tweeted by Rossi: 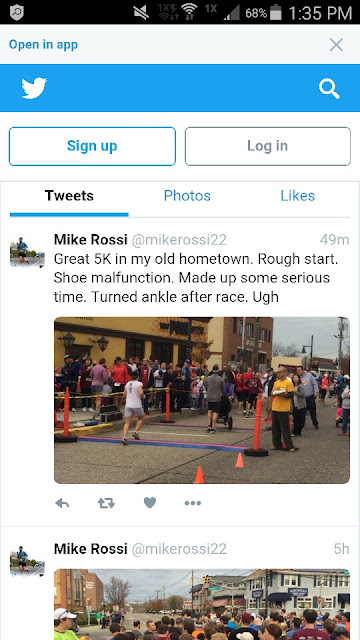 Michael Rossi has since made his twitter private... So far, there is no definite proof Rossi cheated this Saturday, but given his history, it definitely smells funny!

Were you at the race? Do you perhaps have photos or video from the start? If so, I would love to hear from you! 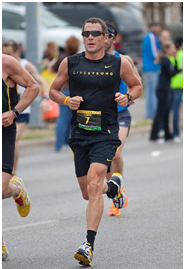 Posted by Tony Rigdon at 3:54 PM No comments:

What kept me from training/racing the past year and a half...

I've never really had back problems, definitely never missed training or racing because of a bad back. But on Friday the 13th of 2013 I slipped and fell on ice. The following day I was registered to do a trail race, the epic 7 mile Pere Marquette Trail race. Leslie and I drove up the night before to her grandma's house and I slept on the floor of Leslie's old bedroom. The following morning, my lower back was hurting and I just assumed it was from sleeping on the floor, didn't think much of it. But over the following several weeks, as I continued to train and run, the back pain continued and got worse, growing into pain radiating down my left butt cheek and my left sciatic nerve.

It took a long time, many doctor visits, x-rays, epidurals, and MRI's to finally get a definitive diagnosis - bulging/herniation of the L4 and L5 discs in my back. Along the way, I learned I also have osteoarthritis in my left hip, most likely resulting from the 2006 triathlon where I was hit by a van. According to several experts, I should be running on my hip, which is why I will be doing more trail running and shorter/faster quality running workouts.
﻿﻿﻿﻿﻿﻿﻿

This evening I rode my mountain bike hard for an hour on some challenging/technical single track and am sitting at my desk typing on my computer, something I couldn't really do a year ago! ﻿
Posted by Tony Rigdon at 7:50 PM No comments:

Getting back at this...

Last time I posted on this blog was in August of 2012, so much has happened since then! I think it was shortly after my last post that I started dating Leslie Goelz and in November of 2013 we got married. In December of 2013 I ended up with several bulging discs in my back which kept me from training/racing through all of 2014 and it has only been in the past few weeks that I've started planning a come back to training and racing. With this in mind, I decided to resurrect my blog and website!

I had actually noticed a while back that the home page on my website www.triathleteguru.com was broken, I had some code that automatically loaded the RSS feed from this BlogSpot page as clickable links/stories. Since this code was broken and I was at a loss on fixing it, I decided to abandon my custom PHP coded website I had created and instead install a Wordpress based website. I've gotten the bulk of the work done with that project, still need to clean the site up though. Look for new/fresh content soon!
Posted by Tony Rigdon at 7:54 PM 2 comments: